Cameras - Which Wildlife System is Best for Me ?

On this page we will explain & give guidance on the camera systems we sell. We hope you will find it useful. Should there be any questions or require any additional help do let us know via our contact page.

"Wired or Wireless Wildlife Camera System ?"- Can be found at the bottom of the page

The resolution of a digital camera is expressed in megapixels. The more pixels a camera can capture, the more detailed the image. Because wildlife cameras and CCTV equipment are video systems, resolution is measured in TV Lines (TVL). This is an analog measure of the number of lines viewable on a monitor screen, also known as Lines of Horizontal Resolution (LoHR). The higher the number, the better the picture renders on a monitor.

There are two types of sensor: CCD (charge-coupled device) and CMOS (complementary metal-oxide semiconductor). Traditionally, more sensitive CCD’s were considered superior to CMOS sensors. The main limitation of a CCD sensor is that it’s susceptible to blooming and smear when overloaded by bright light.

Have you ever wondered why smartphone cameras boast high megapixels, but photo quality isn’t brilliant, especially in low light? It’s because they tend to have tiny camera sensors. Smaller sensors take in less light through the lens and are more likely to suffer image deterioration or noise.

A camera’s sensor size is normally expressed in old-fashioned imperial fractions of an inch. Some manufacturers give the size in millimetres, so it can get confusing. As an example, 1/3 inch sensor is larger than 1/4 inch sensor.

Wildlife cameras can operate in complete darkness with infra-red (IR) lighting. LED illuminators provide light so the camera can operate. The light is almost invisible to the naked eye, so it doesn’t scare animals. In IR-mode, output switches to black and white. The quality of the picture depends on the amount of light provided. For example, our bird box cameras have 6 LED’s, 3 at each side of the lens, which will provide enough lighting for up to 2m.

Lux is a measure of light intensity. Bright sunlight is around 100,000 Lux, complete darkness is 0. It is often used in camera specification. E.g. a 0 Lux camera is a true night-vision camera as it can see with zero light using nightvision leds.

With a wired set-up, a cable sends the video and audio signals. A 3-in-1 cable connects the camera to TV AV sockets (or scart adapter) and mains power. Drilling of holes may be required to pass it through walls. This isn’t always necessary because at 2mm thick, it is small enough slip through a window seal.

Video and audio is wirelessly transmitted to a small antenna. A multi-channel receiver picks up the information which is connected to a TV or PC for viewing. The camera can run-off a battery or through an outdoor power supply.

Both systems have a fairly straight-forward set-up. Neither require tuning-in, you just select the right channel. The disadvantage with a wired system is the hassle. You’ll have to trail cables from the camera’s location to your TV which may involve drilling through walls. But, if you’ve no power outside, and don’t want the inconvenience of using batteries, you’ll have to this with a wireless camera also

Wireless cameras are more expensive (£49.99 vs. £82.99 for a bird box camera kit). However, they have another great advantage. The multi-channel receiver means you can easily expand, adding up to 3 more cameras, without wires.

Both of our wired & wireless camera kits are very straightfoward to set up as illustrated below. 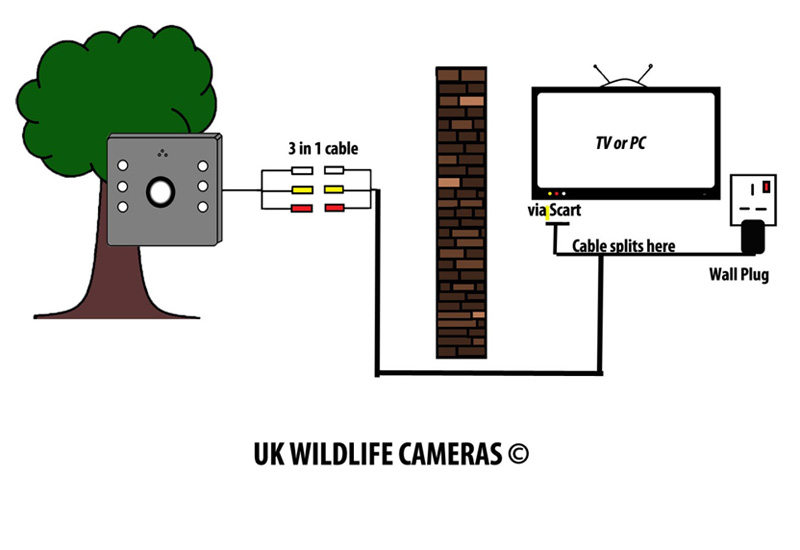 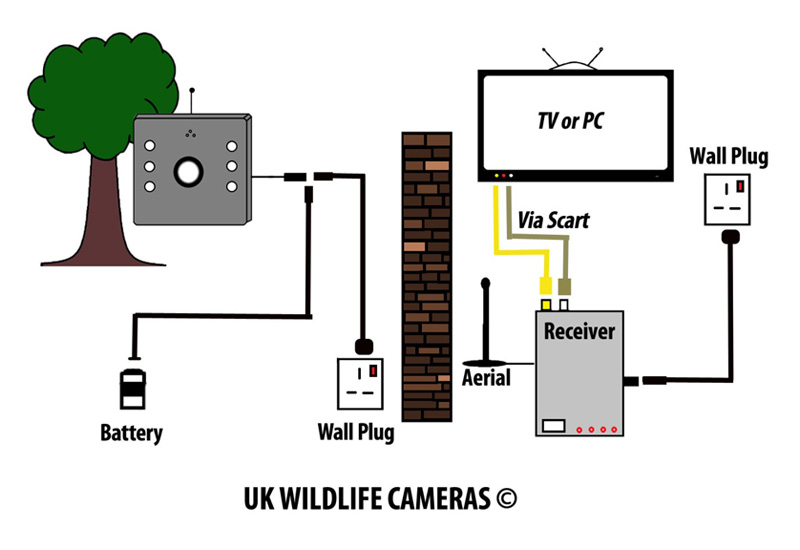 If cabling from the camera all the way to the TV is a problem , then the wireless camera kit is best suited for you. The wireless camera will transmit video & audio wirelessly , however it will need to be powered by a power source. This can either be using the mains power supply unit provided in the kit or using a battery. The mains power supply unit can be plugged to a nearby socket eg shed or a garrage without the need of wiring all the way back to the house.

Quality of the video produced by both systems can be the same. A wireless camera has simply a transmitter connected to the video & audio leads inside unit.