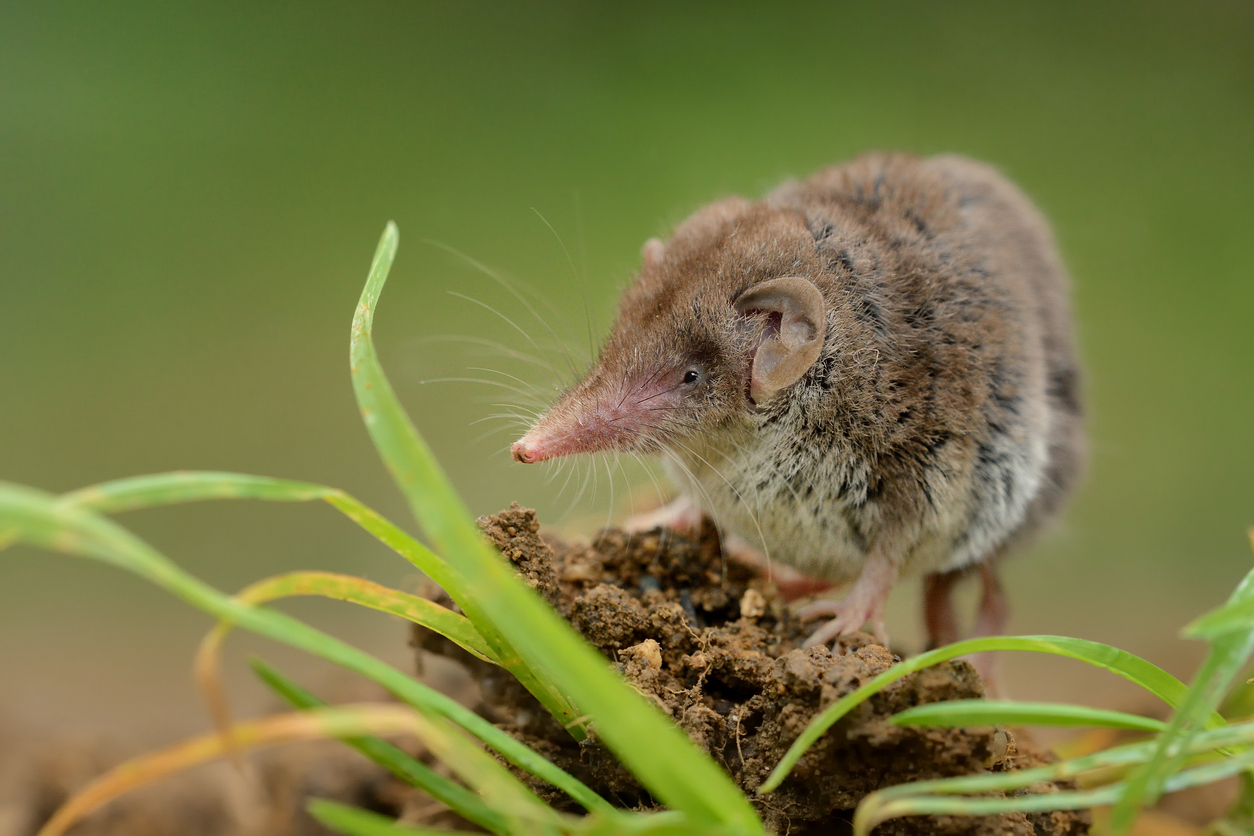 The common shrew is one of the UK’s smallest and cutest mammals and can be seen year-round in many parts of the country.

If you want to learn more about the shrew and find out about its physical attributes, preferred habitat and behaviours, read on!

Shrews are known for their diminutive stature, with the largest measuring around 8 centimetres in length while the smallest adults will only grow to around 5 centimetres. At most, they will tip the scales at 14 grams, but the majority of shrews will fall well below this.

Although they are small, shrews can be identified relatively easily because they have a long nose, helping to distinguish them from mice. They also have compact eyes and ears that are notably small when compared with other rodents that might be seen sharing the same habitat as them.

The shrew’s coat will be a darker brown on the top of its body, with the sides generally being a slightly lighter hue. You may struggle to spot a shrew if it is sitting still, but as soon as it starts scurrying, its speed and small size will make it much more conspicuous.

Where To See A Shrew

There are very few places in which a shrew will not set up its home. Urban gardens and rural fields will work equally well as a habitat for shrews, although they are rather more numerous in the countryside where there are fewer people to disturb them as they go about their business.

Woodlands are an especially popular choice for shrews, not only because of the natural cover which can serve to keep them safe from predators, but also because of the abundance of food that they offer the shrew and its offspring.

The only parts of the UK where you will not see shrews are the islands off the coast, in addition to over the Irish Sea in Northern Ireland. They are essentially a mainland creature, so if you live in England, Scotland or Wales, you should be in with a good chance of seeing one if you are vigilant.

The diet of common shrews is generally a carnivorous one, since they speed through the leaf litter, grass and hedgerows looking for earthworms to snaffle up, spiders to chomp on and even the pupating larvae of moths and butterflies to guzzle.

One of the interesting things about shrews is that they are not specifically nocturnal, but will, instead, happily hunt for food whether it is bright daylight or the middle of the night. This is partly because they have incredibly high metabolisms and need to replenish at least once every 3 hours or so to avoid what would effectively become rapid starvation.

At best, a shrew can hope to live for 2 years, although most will have a life expectancy of around a year once they make it to adulthood.

Shrews mate and produce offspring up to four times over the course of their comparatively short lives, with each litter consisting of six young on average. Female shrews may be spotted with a train of their offspring trailing after them, which may look like a delightful family outing but is usually a sign that they have been disturbed and are looking for somewhere new to rest.

There is a great deal of competition over territory amongst shrews and they will attack each other in violent bouts of fighting to ensure that their patch is protected. They are not shy of using their squeaky calls to intimidate their opponents during these confrontations, which is why we are able to hear them sparring, especially during the warmer months of the year.

Because shrews spend so much time out and about looking for prey and foraging for snacks to fuel their fast metabolisms, you might assume that they never take the time to rest. Interestingly enough, they actually live in burrows when they are not active or when they are raising young, but they do not dig these burrows themselves, instead preferring to move into an unoccupied burrow left by another creature.

Thankfully shrews are not facing any significant threat to their existence in the form of extinction or habitat destruction. It is thought that there are around 42 million shrews living in the UK today, meaning that they easily outnumber rodents such as rats in terms of the current population.

That being said, shrews enjoy a protected status as a result of the Wildlife and Countryside Act of 1981, which means that it is not legal for any unlicensed individual to trap them. This is worth bearing in mind, since precautions to prevent shrews being caught in traps intended for other rodents should be taken.

The common shrew has an even smaller cousin, appropriately named the pygmy shrew. It shares many of the same physical characteristics with its larger relative, yet is distinguished in a number of ways.

Two thirds of the pygmy shrew’s body length is taken up by its tail, which can reach 4.5 centimetres in length alone. Its weight can range from anywhere between 2 and 6 grams and it will usually live for around a year.

The long, narrow snout and tiny eyes of the pygmy shrew give it a distinctive look, while its coat is much darker than the common shrew.

If you thought the common shrew was a hungry critter, the appetite of the pygmy shrew will really impress you. Each day it will eat more than its body weight in insects, which once again is not an indication of sheer gluttony but simply a function of its incredibly intensive metabolism. Because of their size, they do not eat worms like the common shrew, but rather prefer smaller insects as well as spiders.

Like the common shrew, pygmy shrews can be seen in most parts of the country, whether you have a garden in a town or city or you are out for a stroll in woodland in a rural region.

Breeding season for pygmy shrews is April to October and they do not hibernate during the winter months, although like common shrews they will take far fewer risks during the cold seasons, staying in their adopted burrows rather than risking any forays outside.

All types of shrew are prey to carnivorous birds, with owls in particular counting as the greatest single enemy of these tiny creatures. Anyone who owns a domestic cat is likely to recognise the popularity of shrews as a snack for our feline companions.