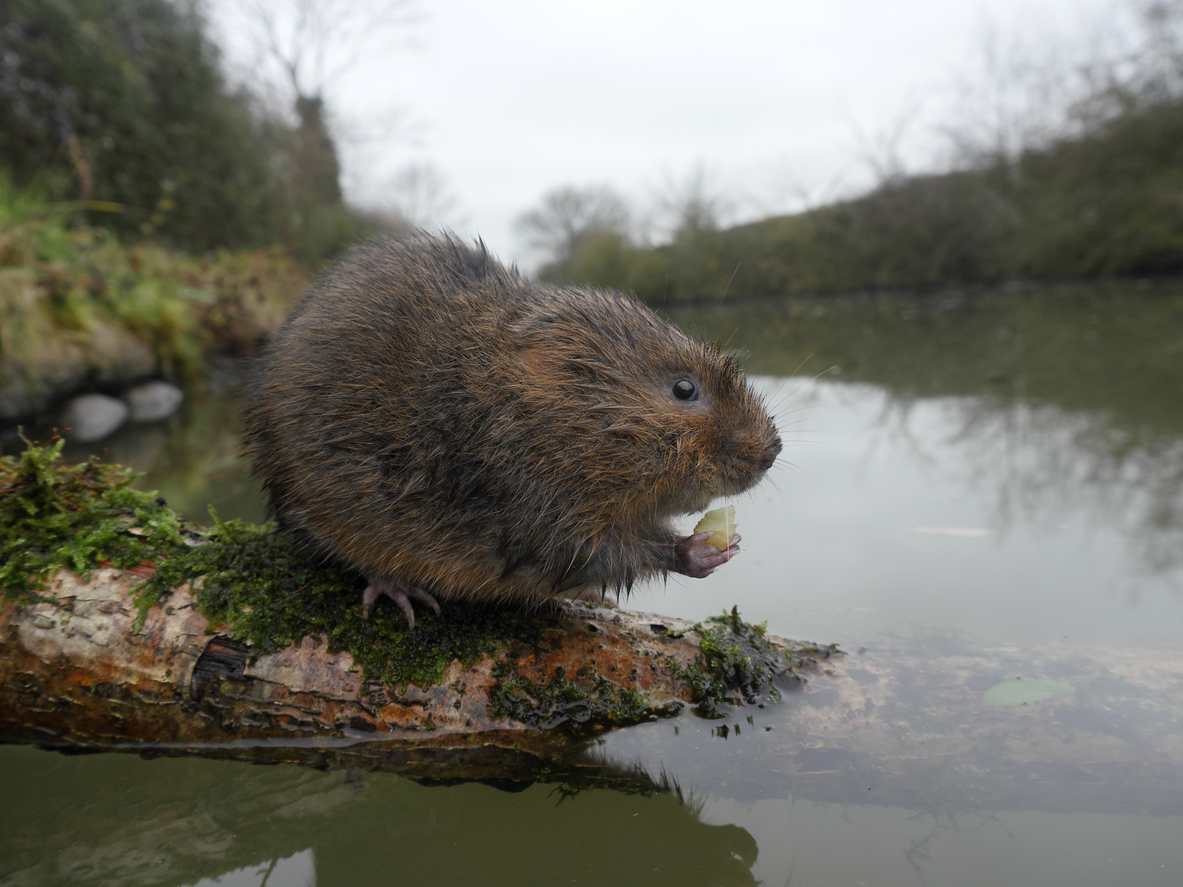 European water voles are native to the UK and other parts of the continent, with the current British population estimated to be somewhere just below 900,000 animals. In the places where they are encountered, they tend to be relatively abundant. However, they are facing challenges as their preferred habitats shrink, meaning that they need the help of conservationists to survive and thrive.

Water voles are larger than any other vole species found in Britain, weighing anywhere up to 300 grams and having bodies that measure up to 20 centimetres in length.

Because of their size, they are very easily mistaken for rats, in spite of being far rarer and sporting a number of different physical attributes which can help to distinguish them.

A water vole’s head is perhaps its most distinctive feature, since its muzzle is a snub-nosed affair; it has ears that are usually hidden in amongst its brown-black fur and its eyes are smaller than those of other rodents of a similar size.

As the name suggests, water voles like to live very close to water, whether that might be a small stream, a working canal, a marshy area of land or even larger rivers, provided that the flow of the water is not too powerful.

Water voles dig their own burrows, forcing their way into the damp earth by the side of their chosen body of water. These burrows are usually fairly inconspicuous, with the voles choosing to enter and exit via an aperture which is actually below the waterline for added security and protection from predators.

Although each water vole will occupy its own burrow, they are relatively communal animals and tend to live in groups along a given stretch of land. Territorial behaviour is exhibited during breeding seasons and a lot of faecal marking is used to determine the boundaries, although physical violence may be needed to assert dominance.

The majority of a water vole’s diet will be made up of grasses, seeds and roots, with seasonal shifts in eating habits necessitated by weather conditions. They are not entirely herbivorous and will snaffle up insects, earthworms and other creepy crawlies, although this is usually done to supplement their diet in hard times rather than as part of their routine consumption.

Like many small mammals, water voles have a very high metabolic rate, while also feeding on vegetation which has a relatively low calorific content. The result is that they need to eat almost constantly; in a given 24 hour period they will usually consume food equivalent to 80 per cent of their body weight.

While some rodent species prefer to hide away in the hours of daylight and do most of their foraging and hunting at night, water voles instead prefer to stay active while the sun is up.

When the colder months arrive, water voles will often cohabit with other members of their colony in order to keep warm, although they do not hibernate during the winter and can be seen out and about in even the bleakest conditions as they search for food.

It is worth pointing out that water is not entirely essential to the lifestyle of the water vole. They can function perfectly well in places where there is no large water source; it is simply not something that they choose to do on a regular basis.

One of the unique things about water voles in the UK is that there is actually something of a divergence between the voles found in England and those that live in Scotland. The English voles are known to share the same lineage as those found to the eastern edges of the continent, having moved back across as the freezing conditions brought about by the last ice age gradually receded. Meanwhile, up in Scotland, the voles are actually from a very different strand, with roots traced back to Spain.

The current population of water voles reflects years of setbacks, with the destruction of their habitat coupled with the predation by the American mink causing numbers of fall by 90 per cent over the course of the 1990s.

Conversely, on mainland Europe, some areas are effectively infested by large water vole colonies made up of several hundred animals, leading to their status as a pest in certain regions.

This contrast between the population levels and densities is an interesting one, indicative of the impact that industrialised farming has had on the UK’s wildlife in particular over the last half-century.

How To Spot Water Voles

If you are eager to spy a water vole in its natural habitat, there are a number of telltale signs which will indicate their presence and give you an idea as to where to focus your attention.

While burrows in riverbanks are not always easy to spot, there are clues that may serve to identify water vole colonies. They tend to keep the area around their burrows fairly neat, trimming the grass and foliage with their teeth so that the entrance is clear of any obstructions, for example.

Water voles use latrines to signal the borders of their territories, so look out for carefully placed droppings which have been deliberately trampled in order to impart the scent of the owner.

When spring arrives, water voles will begin breeding in earnest and a fertile female will produce up to four litters on an annual basis, each of which consists of five pups on average. The territorial behaviour during this season will make them far more conspicuous to humans. However, since they do not hibernate and are more active during daylight hours, they can effectively be seen all year round.

Because of their rat-like size and colouring, European water voles can easily be mistakenly identified as rats, as we touched on earlier.

This is not just something that members of the public may get wrong; it is an error that has been reinforced through literature. The character of Ratty in The Wind in the Willows is actually a water vole, since there is no species of water rat.

These similarities cause other issues because, of course, rats have a negative reputation and observers may feel compelled to combat their presence through pest control. The fact that water voles are endangered in the UK means that they instead require support and we must look to the efforts of conservation workers to ensure their survival.

All of our native species deserve to be protected and thanks to their size and behaviours, water voles are easier to spot and appreciate than most.