While they may not be native to the UK, the muntjac deer population has increased rapidly since their introduction just over a century ago and they are now a common sight in the southern reaches of England.

These diminutive deer are distinct from other species found nationally in a number of ways, so let's take a look at their characteristics, their behaviour patterns and the other elements that make them intriguing to wildlife lovers of all kinds.

As we mentioned above, muntjac deer are not indigenous to the British Isles, but were actually brought here from China at some point in the early 20th century.

Initially, they were kept in captivity at Woburn Park but, as with many now widespread species that did not originally evolve domestically, they eventually managed to escape into the surrounding countryside. There are even suggestions that they were released purposefully, although it is tricky to pinpoint reliable evidence of the exact details of their early incursion in the UK.

Interestingly enough, there were actually two species of muntjacs which were imported and allowed to enter into the national ecosystem, although it was the Reeves’ muntjac that managed to maintain a foothold, meaning that there is just one species on British soil at the moment.

Muntjac deer have been able to thrive in the conditions available to them in the countryside across England, and over the past 100 years they have also made their home in much of Wales even if they have not been as successful in northerly parts of the UK, remaining entirely absent from Scotland.

Because of their non-native nature, these deer are considered to be an invasive species. However, this does not mean that they are lacking any kind of official protection, as they are covered by the Deer Act of 1991 and thus need to be left well alone by humans as a result.

One of the reasons that muntjac deer have been allowed to propagate widely is that they are not an especially destructive species, at least in the context of the wider conversation surrounding deer. While some varieties will do damage to woodland and also compromise crop yields in certain areas, muntjac deer do not create the same challenges and so are fundamentally less of a problem, from a human perspective. 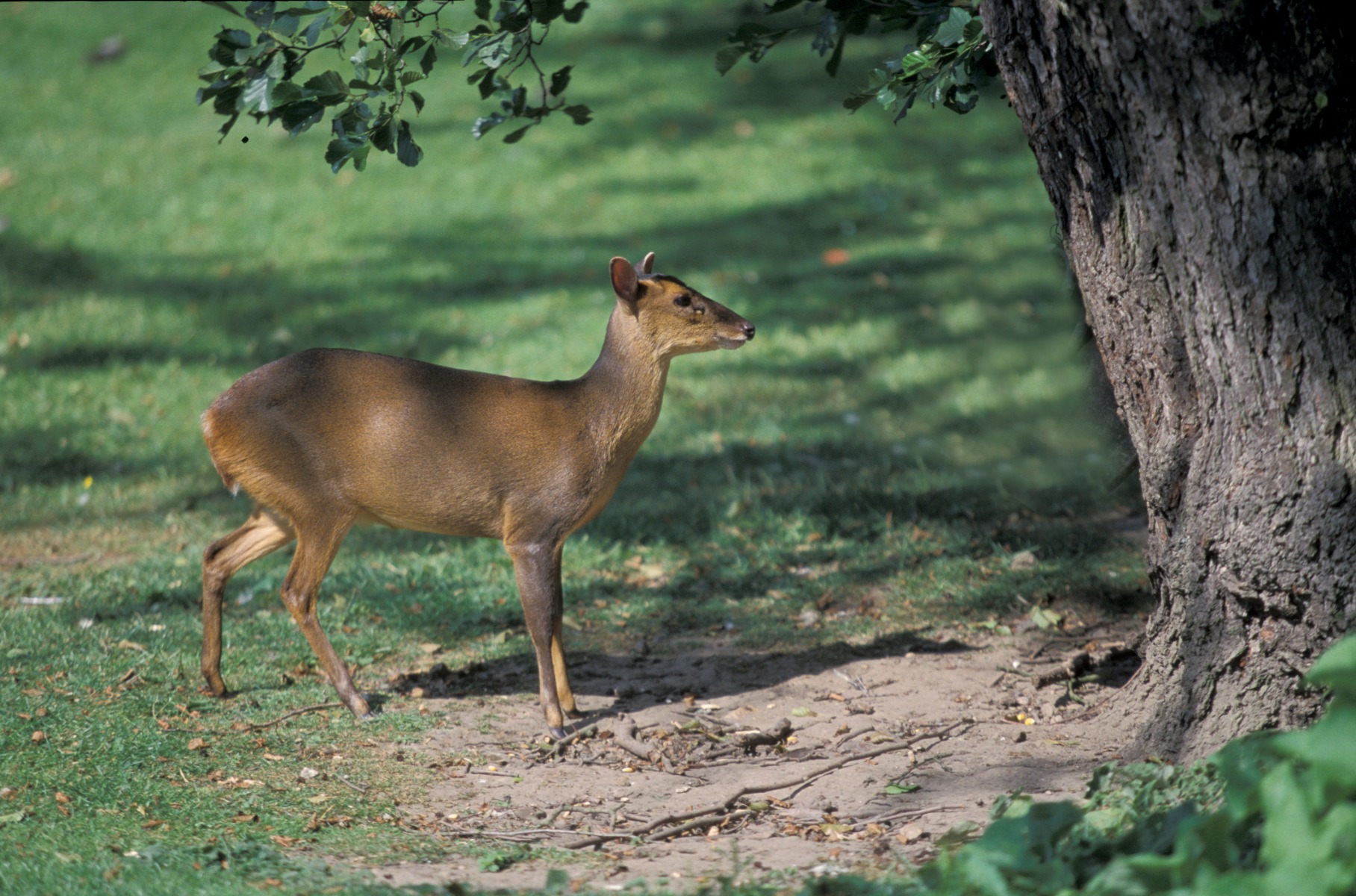 If you are hoping to see a muntjac deer in the wild then the good news is that they can be encountered not only in rural areas but also in towns and cities, so long as the conditions are suitable.

The ideal habitat for a muntjac deer will be a wooded area where there is ample opportunity for the animal to spend its days browsing in the undergrowth, feeding almost perpetually on small plants, grasses and shrubs. This is also why they can be encountered in some gardens, provided that there is enough foliage to satisfy their voracious appetites, as well as adequate access through which to gain entry.

The highest concentration of muntjac deer can be found in the southern reaches of England, but it is possible to spot them further afield. They are fairly adaptable and will not turn their noses up at grassland or farmland if the woodland areas they frequent are not as commonplace in a particular county or region.

Anyone who has heard about muntjac deer will know that they are quite a bit smaller than other deer species found in the UK, such as red deer and fallow deer.

The largest males will weigh in at around 17 kilos and stand just half a metre tall, while the smallest female adult animals will be as dainty as 10 kilos and around 45 centimetres in height.

Fawns have light brown coats dappled with light patches, while adults have darker fur and males sprout small but fierce-looking antlers from their heads as a means of demonstrating their strength and asserting dominance over rivals. Does do not have antlers, and are lighter in colour than bucks, although they do boast a patch of darker fur on the tops of their heads, which gives the impression that they are wearing a toupee.

A good way to spot a muntjac is to look out for the flash of its white tail, the underside of which is eye catching in contrast with its brown fur. You can also distinguish these deer thanks to their unusual body shape, which appears to position their hind quarters higher than their shoulders. This is an attribute that is tailored to their browsing of foliage from close to ground level, allowing them to do this for hours on end in comfort.

These deer are also relatively hardy in terms of their life spans, with some does known to have lived for almost two decades in the wild. Most will survive for at least 13 years or so, meaning they have plenty of time to proliferate and raise subsequent generations of muntjac deer to prolong their legacy.

Breeding habits are another area in which muntjacs differ from the other species of deer that live wild in the UK. Specifically, it is the fact that they do not have a set breeding season that makes them noteworthy, because they are effectively capable of mating and giving birth regardless of the month.

Does of this species are especially quick to recover after the end of a pregnancy, and it is entirely possible for them to be carrying a new fawn within just a few days of producing their current youngster.

While the lack of a seasonal breeding period is unusual, muntjac males still participate in physical tussles with one another. These face-offs are certainly rarer than they would be in other species and usually they are short-lived, with each male exhibiting a greater tolerance of rivals within a given area.

Muntjac deer continue to break the mould by avoiding herd behaviour; instead they either head off solo, or stick together in pairs.

There is no exclusivity in the relationships between male and female muntjac. Instead, they will meet up to mate, then usually go their separate ways either immediately or once the pregnancy has concluded. This means that does can be seen with fawns more regularly than with bucks.

It is worth noting that in spite of their small size and ability to breed at any time of the year, does' pregnancies last a surprisingly lengthy seven months. This is partly why bucks can stick around for longer, although of course, individual animals have their own habits and behaviour patterns.

If you are eager to encounter a muntjac deer in the flesh and you have a good idea of their size and physical identifying attributes, then the other thing you need to aid you in your search is good hearing. This is because muntjacs vocalise with a characteristic bark, which serves a variety of purposes from communicating with other animals to dissuading potential predators from attacking.

The volume with which this barking is executed can be head-turning and once again this deer manages to more than make up for its diminutive stature. If startled, the bark can escalate into a full-blown screaming sound, while mothers and their young will natter to one another in fairly adorable squeaks, which can also be carried on the wind if you keep your ears alert.

Wildlife fans have the chance to spy muntjac deer at any time of the day or night, as they are neither specifically diurnal or nocturnal and instead choose to remain active virtually round the clock, getting in shorter sessions of sleep when they have the opportunity.

There are still periods during which the deer are most active, chiefly in the early hours as the sun is rising and again in the evening as it starts to set. In more heavily populated parts of the country where they make their home, they will be more likely to be seen after dark because this behaviour allows them to avoid contact with humans where possible.

Because muntjacs are browsers, they need to dedicate quite a lot of resources not only to finding the greenery that they munch on, but also to digesting the often hard to process plant life that makes its way into their stomach. This means that sessions of foraging for food are interspersed with periods during which they lay down and allow their bodies to break down the matter as much as possible before they move on.

While muntjac deer may have been brought to Britain rather than originating natively, they are still a much-liked presence in our countryside, with their small size making them cuter and less intimidating than the larger deer species.

The population of muntjac deer is thought to be increasing at the moment and this is a testament to their hardiness and their ability to live and breed successfully in a number of different habitats. They look set to remain a staple of the wildlife scene in the UK for decades to come.