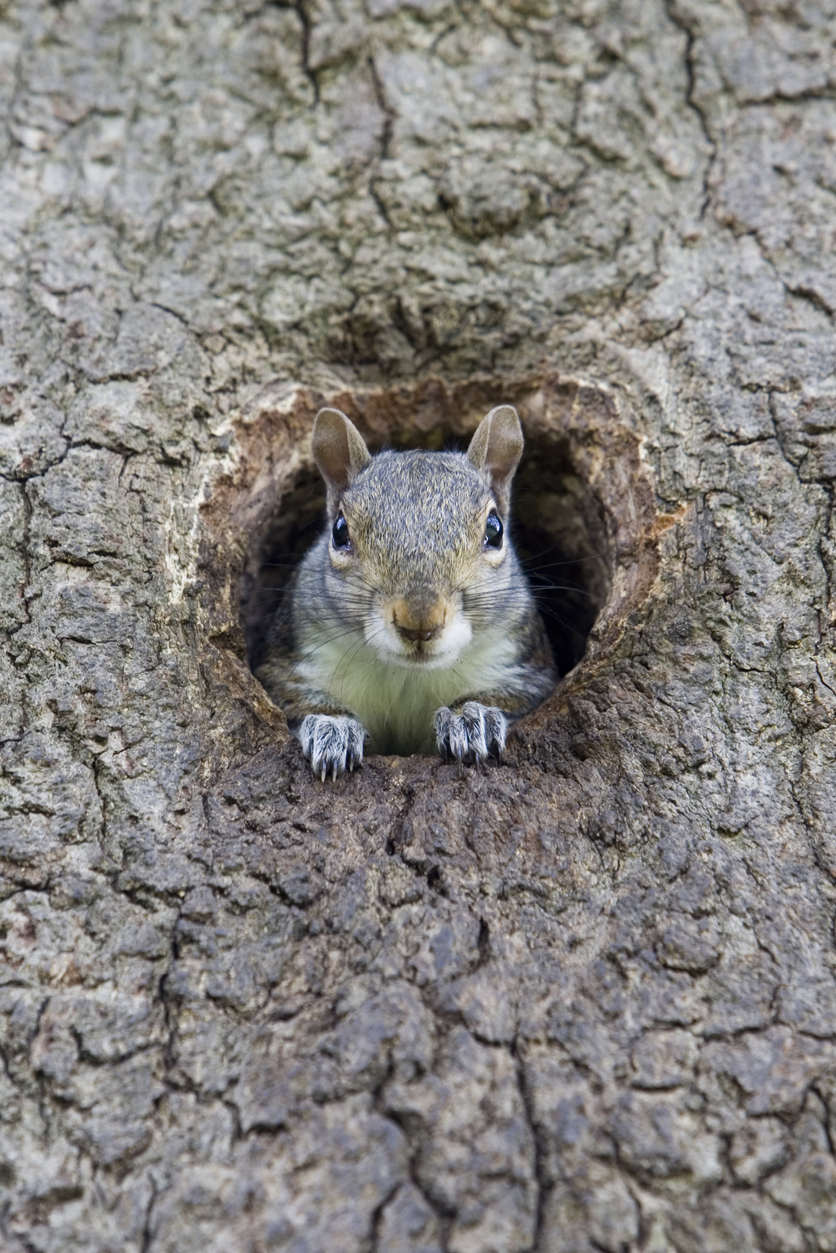 Squirrels are a staple of the UK wildlife scene, inhabiting urban areas and countryside locations alike, while seeming to thrive equally well in both environments.

While most people see squirrels while they are darting about on the ground in search of food, or racing nimbly up trees and along branches, very few will actually know how they spend their time when they are not foraging.

A squirrel nest, also known as a drey, is an intriguing creation that is generally identical in design and construction regardless as to which species of squirrel is responsible for building it. Here is a quick review of what they look like and where they can be found to help you identify dreys in your own garden or while you are out and about.

Some mammals and birds are master nest-builders, using an intricate combination of materials and some dextrous manoeuvring to weave complex structures which look relatively uniform and take some time to make. This is not true of squirrels, as they are neither especially picky about what they use to create their dreys, nor are they too bothered about whether the results are especially neat or consistent in shape.

During the warmer months, when squirrels are most active, they can be seen gathering a variety of materials from the ground to use in their nests. Twigs are the most commonly encountered construction materials, although they are also happy to harvest clumps of moss, mouthfuls of fallen bark, the feathers of birds and anything else that is of a manageable size.

A lot of the choice of material comes down to its insulating properties; squirrels mostly make nests to keep warm in the winter, while also stopping the worst of the bad weather getting through to them while they are resting.

From a distance, a drey will seem somewhat dragged together and might be difficult to spot, because it will be made of the same materials as those found in the trees around it. Once you know what to look for, you will see them more and more regularly.

Squirrels may come down to ground level for foraging and nest material collection, but they prefer to spend their time high up and out of reach of predators when they are enjoying some rest and relaxation. For this reason, dreys tend to be positioned an average of 20 feet up, in amongst the canopy.

A drey is not a free-standing structure, but rather takes advantage of the point at which a branch joins the main trunk of the tree, or a fork in the trunk itself. This provides squirrels with a firm foundation to build upon, and they will gladly use any natural structures like this to their advantage where possible.

Squirrels are also entirely likely to take advantage of any pre-existing nooks in trees, provided that they are suitably high above ground level. This can include natural notches and overhangs, as well as holes created by other animals, such as woodpeckers.

While squirrels do not burrow into trees themselves, they will take the time to expand holes that they find if they are not large enough to allow them entry in their current state. In this sense, they are adaptors, rather than fully-fledged tree architects.

Even if squirrels do manage to find a pre-made place to shelter, they will still make efforts to improve the interior to their liking. Adding materials to create a soft, cosy place to curl up at night is definitely a must for any squirrel that is lucky enough to live in a hole in a tree.

Squirrels do not spend all year in the same nest, and instead choose to switch things up depending on the season, as well as the state of their current drey.

When summer arrives and temperatures are higher, squirrels will be less worried about insulation and will have nests that are somewhat looser in construction, allowing air to flow through and thus preventing them from overheating during especially hot spells.

As autumn comes, squirrels will go into overdrive to build separate nests that are far more sturdily constructed, with thicker walls to keep in as much heat as possible while preventing rain and snow from getting in.

Of course not all squirrels will do this; some will convert a summer home into a winter one simply by augmenting the existing structure with more and more material. This makes sense if there is limited availability of alternative nesting sites, although there are downsides to staying in the same place for too long.

One of the issues with not maintaining two different nests is that it is very easy for pests to infest a single site, which can cause complications for squirrel residents. This is another motivation for making a summer and a winter hideaway wherever possible.

The majority of squirrels do not just have one or two dreys, but can expend energy making many more. This can make it trickier to judge population levels in a particular area, as drey numbers are not directly linked to squirrel numbers and there are typically far fewer animals than there are conspicuous nesting sites.

Another difference in squirrel nests that will depend on the season is whether one or more animals are present. Squirrels like to share body heat on cold winter nights, so drey-sharing is fairly common at this time of year. For the rest of the seasons, you will usually only find one squirrel to a nest, as they like to live alone.

There are some other advantages to sticking together aside from warmth; if there are two or more squirrels in the same drey, it will be harder for any interlopers to get in and disrupt things or even take over via an all-out assault.

When female squirrels have a litter of kits, they will also keep them close in their nest, although no other adults will be permitted to share during this sensitive period either. 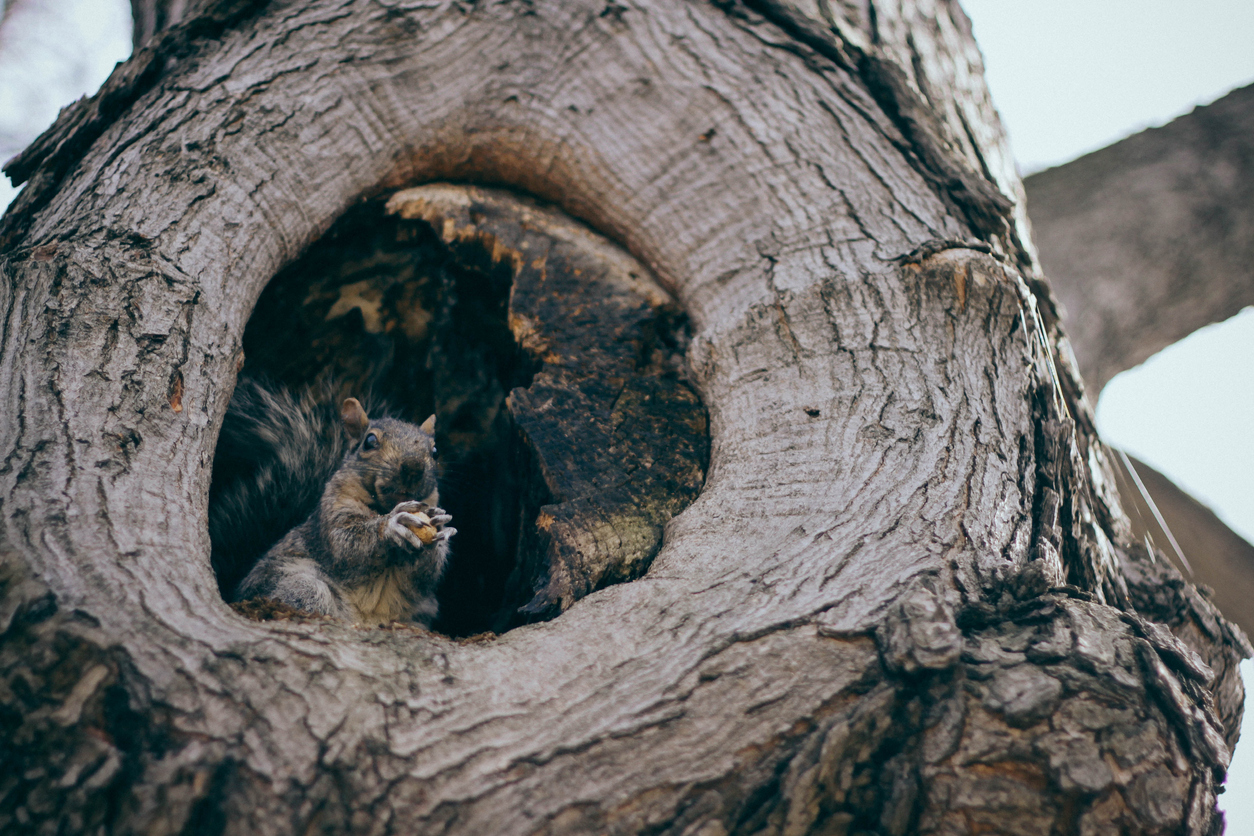 Squirrel nests are not just difficult to spot because they are so high off the ground and blend in with the rest of the foliage, but also because they are fairly similar to many nests made by birds, so you might not always know which animal built the cluster of sticks you can see.

One useful rule of thumb is that if leaves are present in the nest, it is probably the creation of a squirrel. This is because birds prefer to get rid of any leaves from twigs as they build, whereas squirrels will use these to furnish their dreys with a little more protection.

Another sign that squirrels are present in a tree will be claw marks etched into the trunk by their constant scrabbling up and down, as well as discarded pinecones around the base where they have let their finished foodstuffs fall.

The final thing to know about squirrels is that they will also be willing to set up shop inside birds’ nests which have been abandoned by their former inhabitants, adding to these where necessary with their own nesting materials. With a bit of patience and persistence, as well as some experience, you should be able to identify squirrel nests with a reasonable degree of accuracy. 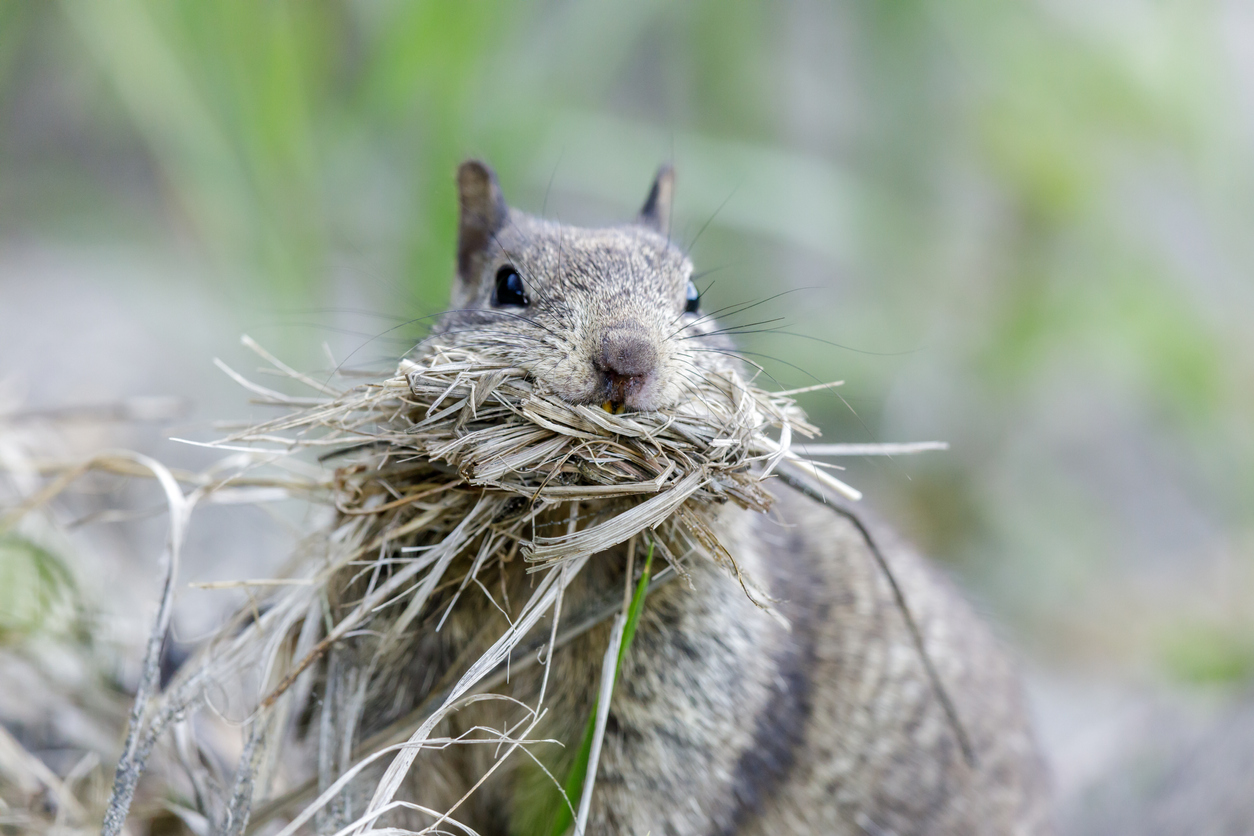